Be careful out there, folks! I don't typically believe in monsters, but I saw this creature crawl right out of Lake Washington the other day. Looks remarkably like me first thing in the morning.  YIKES. ~J

Some Candy with your Wine?

Candy and wine! Two staples of my diet which will be served up together at all three locations of Purple Cafe in honor of Halloween from October 27th thru November 3rd.  Pastry chef Natalie West has created a flight of house-made candy corn, peanut butter cups and pumpkin-shaped jellies ($8)to be complimented by Sommelier Chris Horn's carefully selected flight of wine ($12).  Sounds just curious enough to go check it out. Then on Oct 18th, they kickoff their new seasonal dessert menu with some delectables such as: Irish Creme Truffles, Pumpkin Spice Creme Brulee, Chai Bread Pudding, Molasses Stout Cake and Mulled Apple Cider Sorbet, just to name a few. **The new diet doesn't need to start until Jan 1st.      ~Janis

Posted at 09:00 AM in Kirkland Restaurant Reviews | Permalink | Comments (1)

Soon we will do a more detailed post about the Market Street Cafe and profile Chef Sasha!  For now we have the exclusive first look at their menus:

Janis and I took a tour of the restaurant recently which is looks amazing inside!  They have totally remodeled the the space and added more square footage.  We plan to be one of their first customers  so stay tuned to the blog for more on the Market Street Cafe (more pics, review, profile of Chef Sasha, etc.).    Steve

Posted at 01:15 AM in Kirkland Restaurant Reviews | Permalink | Comments (6)

Do you have something to say about annexation before our City Council makes the decision to pursue it or not?  Bring your questions and learn more from the city and King County regarding zoning/permitting, infrastructure assessments, financial impacts and police/other services.  Steve and I will be there Thursday night (should make for a fun date night!)-see you there?

Don't forget to sign-up for the PACE Race, Kirkland's Prostate Cancer 5K Run/Walk.  I should really get my butt in gear for this one! I can't run but I DO know how to walk. It starts at Marina Park at 9am on 11/4/07 (registration/packet pickup from 7-8:30am) and there are lots of other fun festivities planned, including a post party at Wilde Rover.  This race helps raise the awareness of prostate cancer--what a great cause.  And here's a good info nugget: 60% of men screened for prostate cancer say their wife, girlfriend or daughter encouraged them to make an appt--so speak up for your men, ladies!  (apparently they can't do laundry OR make doctor appts by themselves ;-)

You can register for the race online at www.pacerace.org, in stores (check the website for local locations such as Everyday Athlete in Kirkland), or good old fashioned snail mail: PACE RACE, 1300 W. Nickerson St. Suite 108, Seattle, WA 98119.  Entry fees range from $15-35 depending on when you register and which package you select.  See you on the pavement!  ~Janis

Mama Lucia Loses her Mama and Finds a New Vibe

Mama Lucia, the well-loved, cozy, old world Italian restaurant in Kirkland Park Place, closed its doors in August to embark on a major overhaul.  The seats were always full and the crowd is fiercely loyal to this family owned business of twenty years.  So, it's exciting to see the place getting a facelift and major expansion into what used to be the retail space next door (Articles).

Mike Halter, a 28 yr old Kirkland native, has always been involved in his family's restaurant businesses (there are 5 total) and stepped it up a notch when he bought out his brother seven months ago and moved here from L.A.  Having previously run this location, you'll recognize him as a familiar face with a vibrance that makes you feel like an old friend (photo left).  He's dropped the Mama and has big plans for "Lucia" , pronounced 'Lou-Chia' which will be opening in late October/early November.

He's added over 2000 square feet to his space and has a contemporary look coupled with some rustic Italian charm intended to create a feel that will be warm and mix both the old and the new.  There's a big stairway up the side that is dark chunky wood with cable wire railings that leads up to a private dining room that can hold 60 people.  There will also be a bar/lounge area and live music to attract the happy hour crowd.    Mike wants to maintain the foundation, and value, by keeping some previous menu items (don't worry, they're not changing the CSR dressing!!) and offering up some different dishes as well.  Lucia will be open for lunch and dinner. Hours will be 11-11 and you'll make reservations at 425-889-0200.  Let's keep our eyes on this one! ~j

Check out the view

The water is a bit chilly

, but the scenery is still top notch.  This was taken at Thursday morning's sunrise on Lake Washington looking towards downtown Kirkland. You can click to enlarge. Have a great weekend!~Janis

Touchstone Development is looking for your insights on the re-development of Kirkland Park Place.  The sale is complete now, so if you've got an interest in shaping the future of our favorite little downtown shopping center,  you need to open your pie-hole!  www.envisionkirklandparkplace.com   ~Janis

The Heathman is (Finally) OPEN !!!

Last Tuesday, on Oct 2nd, the much awaited opening of the Heathman Hotel in Kirkland took place.  The hotel does have availability (425-284-5800) and there is even a special rate at the moment for $249/nt and it goes on up to $3K for a suite.   The spa opened on Saturday.  When we drove by on Saturday night the restaurant, Trellis ,looked like it was pretty busy.  Anybody been?  Dying to hear your review.  We'll give you ours soon........j

Seems like any time I'm in North Kirkland and looking for a park to run the kids, I end up heading back to the usual suspects of the downtown Kirkland area.  Then I discovered 132nd Square Park sitting on the corner of NE 132nd St and 132nd Ave NE (why do we use numbers as all the streets around here? That's crazy).  You enter the park from NE 132nd Street.

This park is GIANT.  Baseball fields, soccer fields, plenty of parking, walkways, picnic benches, bathrooms, lots of grass and brand new play structures for the little people.  There are plenty of big trees so you can choose whether you prefer the shade or sunshine.  SUNSHINE?! Huh? There are two play structures, one geared towards ages 3-5 and the other bigger one is for ages 5-12.  Of course, my 2 year old wants to play on the big one, so you need to keep a close eye here b/c it's really designed for the bigger kids.  There's one part that looks like a giant rolling pin that even I thought looked like fun.   I can do this, I thought, in a gerbil-on-a-wheel sort of way.  After multiple attempts (you didn't see me did you?) I cannot recommend that wheel for 35 year olds.

Anyway- you should check this one out.  Many improvements were recently made in a collaboration between the Totem Lake Neighborhood Association, King County Parks and the North County Parks Coalition.  Bonus: the play structures have been pretty empty each time we're there, so you can get the place to yourself.  It's expansive with a good feel, and it's all nicely tucked far away from the roadways.  If the parks dept would put a trash can over near the entry/exit to the park (by the bathrooms) it would be almost perfect!  ~Janis 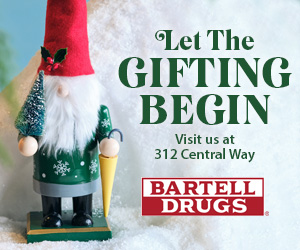