Fellow Columbia Athletic Club member, Craig Smith kept telling me how much he enjoys the new independent bookstore, named BookTree, on Market St.  So I told him "write me a post!" and lucky us...he did! Craig is a retired Seattle Times sportswriter who has lived in Kirkland with his wife, Julie, for 40 years. Julie took the photo for this story.  Thanks to both of you for sharing your love of Kirkland and its businesses... 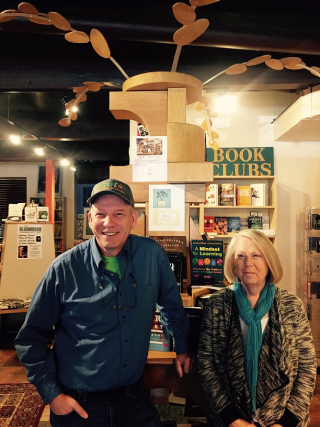 Kirkland is a town that likes itself, and one reason I like it is because it once again has a bookstore.

BookTree at 609 Market Street – across from the landmark Kirkland Arts Center -  opened in November after a fund-raising campaign and remodeling of what had been a beauty salon.

The ambitious undertaking of opening a bookstore in the read-on-device era was funded in part by donors who gave as little as $20 and as much as $2,000  for a total of about $25,000. These were donors, not investors. Many of them had been devoted customers of Parkplace Books, which closed in December, 2015, before demolition started for the Kirkland Urban development.

Mary Harris  had co-owned and operated Parkplace Books with Rebecca Willow, who retired when the store closed. Harris wanted to stay in the book business and her new business partner at BookTree is Chris Jarmick, a poet and author and now bookseller. Jarmick, whose background includes various film and documentary projects in Hollywood, has a poetry book “Not Aloud“ he wrote and a novel “The Glass Cocoon” he co-wrote on the shelves.

The store name reflects its Parkplace Books roots. It comes from the whimsical 8-foot-tall  wooden sculpture of a tree that has shelving space for books and sits in the store. The tree, made by staff at Intiman Theater, previously was in the children’s area at Parkplace Books.

BookTree has about 20,000 new and used books in stock. It also sells some audio books and used DVDs, cards and playing cards, collector books and some puzzles. Any book in print can be ordered and sometimes is available within 36 hours. The art on the walls is by local artists and can be purchased.

A mid-March e-mail to customers and supporters said, “Happy to report that we have seen a few more people in the store.  We are still struggling and juggling to make ends meet, but we are moving in the right direction. . . . A few more sales per day will help us a great deal and make sure we can continue being one of the last independent bookstores on the East Side… and the only one of our kind in Kirkland!”

Just as Parkplace Bookstore did, BookTree  hosts appearances by authors and poets and serves as a meeting place for some book clubs. The bookshelves are on wheels and roll out of the way for seating of up to 40 people. A recent event featured Tod Marshall, Washington State poet laureate and included a workshop, reading and open microphone. On the fourth Tuesday of every month a 7 o’clock a “book of the month” discussion is held. The April book is “Sympathizer” by Viet Thanh Nguyen.

The store has a separate children’s section complete with two huge beanbags on which kids can lounge and play. Every Wednesday at 11 a.m. there is a story time for preschoolers.

Co-owner Harris, who has been in the book business for about four decades, may have put it best when she said, “How could I live in a town without a bookstore?”  She doesn’t, and she is the reason she doesn’t.

Thanks again for this wonderful article. BookTree - Kirkland's only full service independent bookstore will be celebrating its one year anniversary on November 4th with several authors and surprises!