The name just sounds kind of bad ass, right? Well it is, so let down your hair and unbutton your shirt and order up. The old Dub Pub is closed on 124th in Totem Lake and Smoke & Shine Barbecue and Whiskey has arrived. It's been open for about a month now, but everyone seems to have found it just fine. They had been remodeling since July 2018.  Brady and I strolled in after his baseball game on a Sat night to the buzz of people and TV's and live music getting ready to roll.  It's a large space and it's insanely LOUD, at least for my old ears, but it has a fun casual vibe that makes you want a cold beer and gaggle of friends around you. 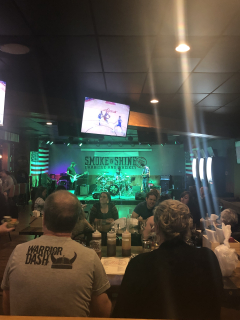 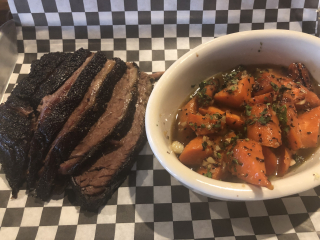 The brisket that I ordered was FANTASTIC.  Super moist and tender-def worth going back for. I orderd it a la carte and had some garlicy carrots to go with it.  Oh, they have their own smoke so  don't delay because that brisket....when it's gone, it's gone.  Brady had the pulled pork sandwich which he inhaled after scraping off the cole slaw. Service was great, very prompt and helpful with navigating the new menu. Food came out crazy fast and was $12-14/plate. They have live music on Friday and Saturday nights and there's a big bar in the center of the space. My drink was $13 which was the same as my dinner, so our tab for 2 rang in at roughly $50. Parking is a little tricky because that little lot can fill up fast but plenty of people are constantly coming and going, but you all are used to such challenges.

Posted at 10:00 AM in Kirkland Restaurant Reviews | Permalink | Comments (2)